Hello! Hi! It’s me again! Work is stressful! I stopped reading! I watched a lot of Ru Paul’s Drag Race! How have you been?

I’m back today with my TBR for #TheReadingQuest! This amazing readathon is hosted by Aentee @ Read at Midnight, and the lovely artwork was created by CW @ Read Think Ponder. This readathon is based on video games, in that you choose a character class and do challenges based along their path, gaining points as you do so. The readathon runs from Sunday 13th August to Sunday 10th September. You can find out more information at the sign up post! 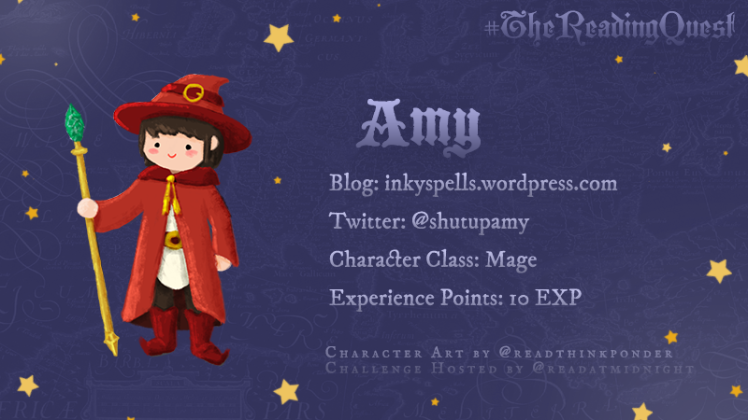 As you can see, I’ll be doing the Mage path. I picked this both because mage is pretty much my go-to character choice in any fantasy RPG, but also because I have a lot of books that match the prompts! 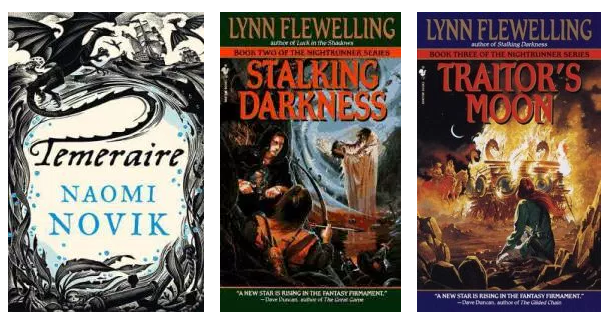 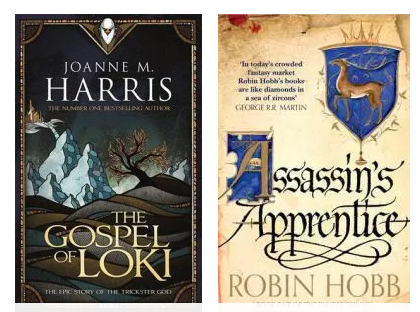 A BOOK WITH A ONE WORD TITLE: Temeraire by Naomi Novik

A BOOK THAT CONTAINS MAGIC: Stalking Darkness by Lynn Fllewelling

A BOOK BASED ON MYTHOLOGY: The Gospel of Loki by Joanne M. Harris

A BOOK SET IN A DIFFERENT WORLD: Traitor’s Moon by Lynn Fllewelling

THE FIRST BOOK IN A SERIES: Assassin’s Apprentice by Robin Hobb

I’m not sure how many of the below I’ll actually get to, since I ended up picking a lot of dense fantasy novels for this challenge (though, admittedly, they aren’t as long as they could be). However, a few books immediately came to mind when I saw the side quests, so I figured I’d include them anyway! 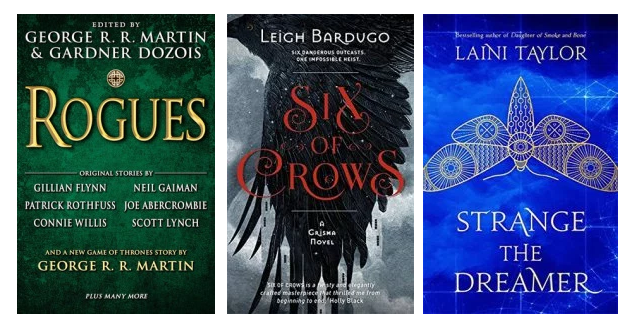 So that’s my overambitious TBR! Hopefully I can get to at least half of these books?? I’m super excited to read all of them, and seeing everyone else’s TBRs is making me so excited!

Good luck if you’re also participating in the readathon! 🙂 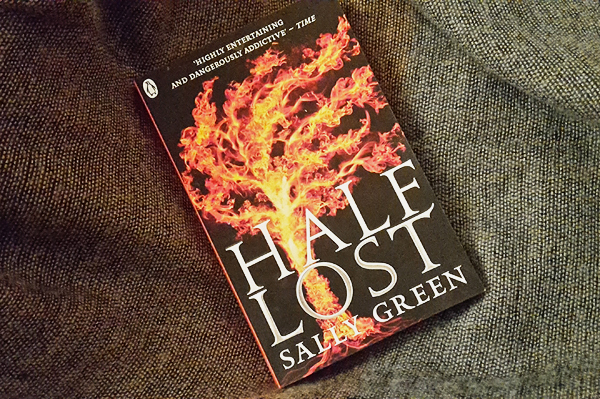 I’ve never felt more conflicted about a book than I have about Half Lost. I was wary about starting this series because of all the hype it was getting, but when I was finally convinced to read it, I was pleasantly surprised. Green took risks with her writing, and the world felt harsh and unfair, and Nathan was such a compelling character. I loved that Witch was a gender neutral term, it was such a small but clever decision to make. This, combined with the fact that it was White witches that were “bad” and Black witches that were “good” (while they aren’t racial codifiers in the novel, it would be a little silly not to suggest that we don’t see white/black as such, generally) it gave me a really good feeling about the series. It felt different from other young adult novels, and after finishing Half Bad, I was very excited to read its sequel, Half Wild.

Half Wild blew me away. I was one of my favourite books of last year. I thought that the series made incredible progress, and it took turns that I genuinely wasn’t expecting. One of the things I was most surprised by was the introduction of Gabriel as a love interest for Nathan. I was so, so pleased that there was a potential for an actual same-sex relationship in a young adult series that featured the main character. I’d barely come across it before, and only ever when I’d really been looking for it. After I’d finished reading, I was incredibly impressed, and I felt bittersweet about the series ending, because I wasn’t ready to let this world go.

Which is why I’m so conflicted, prior to the final book, I genuinely loved this series, and while I was really dissatisfied with the ending, I’m not sure that I want to warn people off it entirely.

I was initially a little concerned when I picked up Half Lost at a bookshop and noticed that it was considerably shorter than its previous instalments. I began worrying about how the series would be able to successfully conclude in what seemed to be so few pages.

These worries pretty much disappeared when I actually started reading. It was action-packed, and compelling as ever. Nathan’s morality is so complicated, and it was really interesting exploring this. I loved his relationship with Gabriel, and how Gabriel influenced him and made him want to try to be better, to be considerate, and not give in to his violent impulses. Nathan and Gabriel remain the strongest points of this series for me, the scenes between them were my favourites in the book.

I enjoyed probably the first 90% of this book. I had issues with a few things—Hunters in this world are mostly women, so this involved Nathan killing a lot of women (which made me uneasy, but moreso when a situation arose in which he could have killed male guards, and didn’t). Also, to say that Analise was barely in the book, Nathan thought about her all the time—more precisely, he thought about how he was going to get his revenge, and kill her, all the time.

Ultimately, this didn’t work for me because Green was writing a war story that didn’t feel like a war story. The White Witches never felt like enough of a threat, so while these characters were going through hell, it never felt like they were, which made the ending (I’ll get into this) feel like it was done for shock value, and little else. Really, it came down to people talking about war and how hard and unfair it is, without it ever really feeling that way. In regard to the ending, the trouble is, I can’t specify what made me so mad, and so disappointed without spoiling the ending. It engages with a really awful trope, and still, I can’t even tell you what that trope is without spoiling the ending (this is an issue! The name of this trope indicates exactly which character it effects). However, I do want to talk about it so the rest of this review will contain spoilers. If you’re interested in the series and don’t want to be spoiled, then skip this next part.

If you want the no-spoiler reason for my disappointment, it really comes down to the fact that the message at the end of this series seems to be that if you’re broken, you can’t be fixed, and if you’re different, you can’t be happy.

END_OF_DOCUMENT_TOKEN_TO_BE_REPLACED 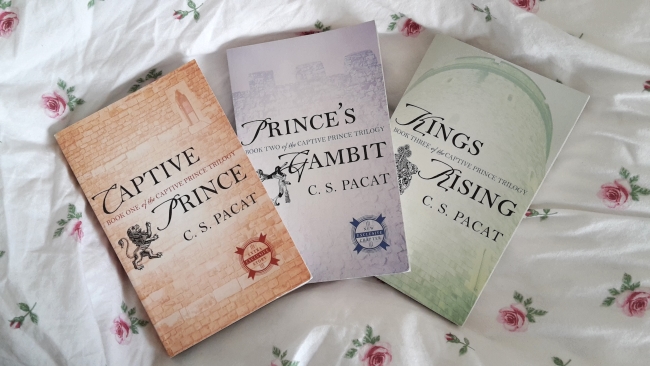 I put off reading these books for the longest time. I first heard about them a few years ago, and for whatever reason I was never tempted enough to pick them up. With the release of the third and final book a couple of months ago, it started popping up on my Tumblr dash again, so I impulse bought the first book. To be honest, when I started reading Captive Prince I really wasn’t sure that I was going to like it. I didn’t read the synopsis when I bought it, so I’d forgotten that the books were going to deal quite so closely with slavery. Despite that, I ended up staying awake until 3AM reading Captive Prince, and when I finished it up the next day, I began hunting down copies of the second and third book. It’s a really enjoyable, really interesting series. They are kind of “guilty pleasure” books, but I enjoyed them so much that I’m past whatever “guilt” I felt .

Damen is a warrior hero to his people, and the truthful heir to the throne of Akielos, but when his half brother seizes power, Damen is captured, stripped of his identity and sent to serve the prince of an enemy nation as a pleasure slave.

Beautiful, manipulative and deadly, his new master Prince Laurent epitomizes the worst of the court at Vere. But in the lethal political web of the Veretian court, nothing is as it seems, and when Damen finds himself caught up in a play for the throne, he must work together with Laurent to survive and save his country.

For Damen, there is just one rule: never, ever reveal his true identity. Because the one man Damen needs is the one man who has more reason to hate him than anyone else.

Before I really get into it, I need to warn you for discussions of slavery, sex slavery, sexual abuse, rape, threat of rape, threat of violence, actual violence, and paedophilia. These issues feature or are discussed in the books at varying levels of intensity, but I’d rather overstate them than understate them. So if any of those things makes you feel uncomfortable, it’s worth seriously thinking about whether you want to read the books.

With that mentioned, let’s get on into my review.

END_OF_DOCUMENT_TOKEN_TO_BE_REPLACED 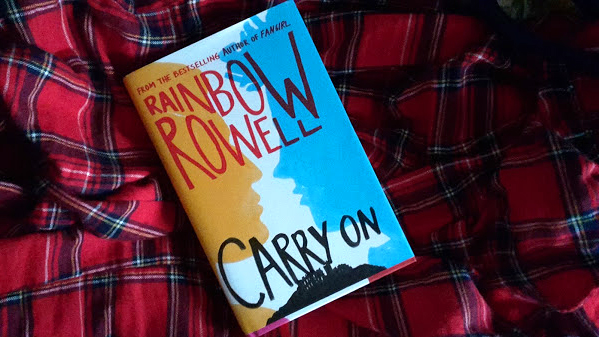 I’ve been excited for this book ever since Rainbow Rowell first announced it. Amidst all the anxiety and stress of my final year of university (and, frankly, all the anxiety and stress of everything that comes after that) this book was a constant source of excitement. It did not disappoint. It did, in fact, exceed every admittedly high expectation I had of it. I absolutely loved this book.