I was nominated for this award by Fatima @ Noteable Pad and Katherine @ Fabled Haven! Thank you both so much! Sorry it’s taken me so long to get around to posting it! 🙂

I love that this award encourages people to feel positive about themselves, although I actually struggled to come up with 7 things. Like a lot of people, I find it much easier to criticize myself than praise myself—or I could point out my more “negative” traits that I don’t really mind, like “I’m bossy” or “I’m short-tempered” haha! 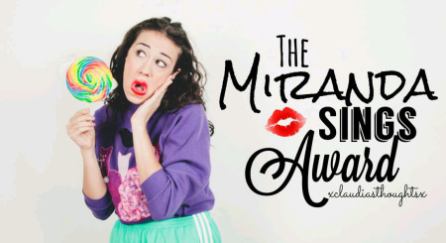 7 THINGS I LOVE ABOUT MYSELF

I’m honest. Not just in the vaguely mean way either, though I suppose I mean that, too. I don’t think honesty just means “tell someone your mean opinion”, I think it means the good stuff too, so if I think one of my friends looks nice, I’m going to tell them that they look nice.

I’m smart. Usually I’m hesitant about saying this, though I don’t really know why. I’ve always been “academic” in that I always did well at school. I achieved a first on my undergraduate degree, and I’m doing a masters degree. So I’m smart in that sense, but I’m also quick to learn more generally. If I want to learn how to do something, I google it, read up on it, and then usually I can do said thing competently after a couple of tries.

I’m a good listener. Sometimes, things just don’t need my opinion (I know, I’m shocked too) and I like to think that I know when to just listen to what someone has to say. I like to think that, most of the time, I can distinguish between when someone wants advice, and when they just want someone to listen to them.

I’m more confident. A few years ago I could barely manage to say thanks to a bus driver, let alone start a conversation with someone I didn’t know.  I’ve learned to be more comfortable with myself and now social situations in general are nowhere near as daunting as they used to be!

I make people laugh. I wouldn’t go as far as to say that I’m funny, but I am pretty good at cheering people up.

I’m kind. Like I said before, I make an effort to say nice things to people—specifically things that I actually mean—because I know how much a compliment can brighten someone’s day.

If you’ve done it before, or you don’t want to do it, then that’s no problem 🙂

26 thoughts on “The Miranda Sings Award”